Almost 5 years these two musicians hit the road together, road which started during a tour in Argentina in 2011! And on May 13th, they decided to perform at Alliance Française Bangkok!

Baptiste Trotignon, one of our best European jazz pianists, who recently also distinguished himself as a classical composer, get every time the support of public and critics, be he playing as a leader (most recently with his trio “Hit” with the incredible drummer Jeff Ballard), as a sideman (Aldo Romano, Stefano Di Battista…), in duo (Mark Turner, Brad Mehldau…) or in solo that he practices since the beginning of his career.

Argentinian Minino Garay, based in Paris for more than 25 years defies all categories: not only drummer, nor only percussionist, but able to incorporate Latin rhythms into jazz, musical field where he blossomed and that let him play with great artists such as Dee Dee Bridgewater, Jacky Terrasson…

With only the two of them and a purely acoustic instrumentation (piano /percussions), they learn from each other’s experiences, report in music their historyand their culture in a festive and poetic manner. With a very broad directory ranging from songs to jazz, from their own compositions to the Argentinian tango, they love playing with beautiful melodies and improvise with South America’s rhythms. A true human and musical friendship which will result this year in the release of an expected album called “Chimichurri”, especially by the public who already enjoyed their complicity and the energy that they communicate on stage. 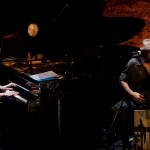 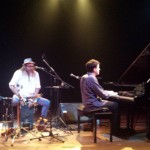