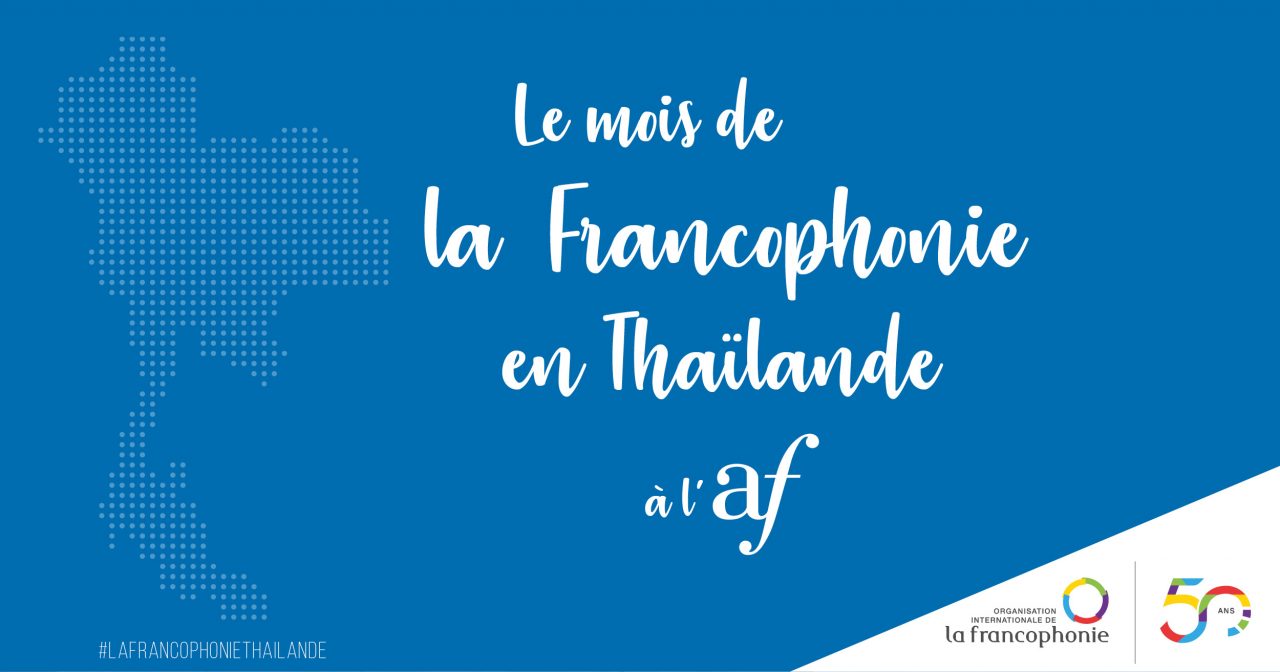 The Francophonie Month is back again this year, at Alliance Française de Bangkok!

The month of March will be filled with many cultural events and activities.
Check out this year’s program.

The Francophonie month in Thailand

2020 is a special year as the Francophonie celebrates its 50th anniversary. Then, after Belgium in 2019, it is now the turn of Luxembourg to organize the celebration.

In partnership with Alliance Française Bangkok, the Thailand’s Ministry of Foreign Affairs, the Thai Association of French Teachers, TV5MONDE and the French International School of Bangkok (Lycée Français International de Bangkok or LFIB), and in collaboration with the Embassies of Belgium, Cambodia, Canada, Egypt, France, Morocco, Mexico, Poland, Romania, Switzerland and Vietnam, the Embassy of Luxembourg in Bangkok is pleased to invite you to celebrate this year’s Francophonie month in Thailand.

Throughout the month of March, the aforementioned partners will organize a series of activities including concerts, film screenings, exhibitions and so much more!

And on the 21st of March, the International Francophonie Day, all the partners will meet at Alliance Française Bangkok and will offer you many activities and games.

The French language in Thailand

French is the world’s 5th language and in Thailand, it is taught in approximately 210 high schools and more than 30 universities. In addition to hundreds of thousands of speakers, there are now some 40,000 learners in the country.

The Francophonie: what is it ?

The Francophonie is first and foremost about women and men who share French as a common language. The number of French speakers, spread over five continents, is currently estimated at 300 million.

Ensuring Justice for Survivors of Sexual Violence
Screening of ‘The man who mends women’ in the presence of the co-scriptwriter Colette Braeckman, followed by a debate (in English)

In partnership with UN Women

Women in Focus By Ploy Phutpheng
Leading up to the International Women’s Day 2020, this new exhibition celebrates all Women in their role, achievements and contribution to their own community

Live
By Vlad Paunescu
In Romanian with English subtitles

Matthias & Maxime
by Xavier Dolan
The movie has been nominated at the Cannes Film Festival 2019 for the: ‘Palme d’or’, ‘Best scenario’ and ‘Queer Palm’

Chopin, from Warsaw to Bangkok
Special concert for the opening of the exhibition
on Frédéric Chopin.
(Exhibition until 31 March)

In collaboration with
La Maquina Graphic Workshop and Gallery

Rough hands
By Mohamed Asli
In Arabic with English subtitles

Baroque Experience
Collaboration between the French conductor Michaël Cousteau, the Thai Choreographer Jitti Chompee and the students of the Princess Galyani Vadhana Institute of Musicon the occasion of the 333rd Anniversary of the Siamese envoy to France

Festival | All of the participating countries

International Francophonie Day
Games and various activities throughout the day

09:30 – 11:30 | Seminar
‘The French language: an Asset in a Connected
World’ by the Thai Ministry of Foreign Affairs with
the support of the Franco-Thai Business Forum